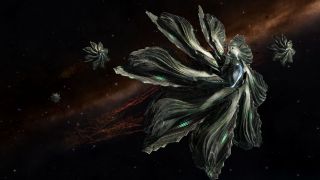 An Elite Dangerous player has been suspended from Twitter after posting a poem about the online space trader’s alien Thargoid race.

As reported by Eurogamer, Belgian Elite Dangerous player Tim Wellens was banned after his reply to this poem from the game’s official Twitter account was deemed to violate the platform’s rules “against posting violent threats.”

There once was a pilot from Lave,
Who wasn’t particularly brave.
He encountered a Thargoid,
Who he tried to avoid,
But now he’s one foot in the grave!

Roses are red,
Violets are blue,
Thargoid or foe,
I will come to kill you.

Eurogamer says Twitter then issued the suspension—on the universal grounds that users “may not make specific threats of violence or wish for the physical harm, death or disease of an individual or group of people”—to which Wellens has appealed.

“I explained that Elite is a space game and that thargoids are a fictional alien species in a game, and that I never ever threatened a real person or organisation on Twitter,” Wellens tells Eurogamer. “Thargoid or foe, I’m coming to kill you, was directed to the thargoids and enemies in game. In the beginning I was very angry as I follow a lot of friends who I’ve known for a long time.

“What hurts me the most however is the fact that I feel I’m judged by a computer, and I have no means to defend myself. It’s like fighting an A.I. I understand they have to use software to root out ugly tweets, but I was hoping a human being would do the investigation.

“It would have only taken them five seconds to see that my tweet was completely harmless—and I have seen much more violent tweets than mine.”