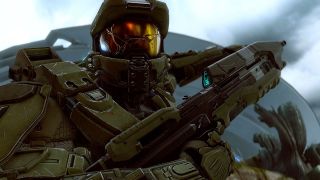 When Halo Infinite was announced for Xbox One and PC at E3 this year, we thought we were getting our first Halo (not counting RTS spin-offs) since the PC port of Halo 2. This might no longer be the case. Don’t worry, Halo Infinite is still on its way, but we might be getting another PC Halo before that with Halo 5: Guardians.

The 2015 FPS has been re-released on Xbox One, but a recent change to the box art featured in the Amazon listing suggests that it might not be the only additional platform. Previously labeled “Only on Xbox One”, it has since been updated to read “Xbox One console exclusive”.

Not only does this leave the door open to a PC version, the label has already appeared on games that are part of Microsoft’s Xbox Play Anywhere programme, such as Rare’s Sea of Thieves. It means that when you purchase the game, you also get access to it on your PC. It’s still a fairly small list at the moment, but it’s growing.

Launching before the programme existed, there were some mixed messages when it came to Halo 5’s platform allegiances. Xbox’s Phil Spencer said it probably wouldn’t appear on PC because it was designed specifically as a console FPS. Developer 343, on the other hand, said there was a good chance of a PC port. While Spencer said it would be a challenge to port, 343 said it wouldn’t be that hard.

In the end we just got Halo 5: Forge, a free multiplayer standalone.

Microsoft has yet to confirm that Halo 5 will be an Xbox Play Anywhere game, and the official store hasn’t changed the platform details, but the Amazon update is certainly compelling evidence.

In the meantime, here’s everything we know about Halo Infinite.