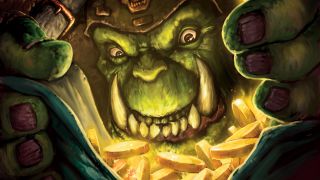 In August, shortly after the release of World of Warcraft’s seventh expansion, Battle For Azeroth, The Lazy Goldmaker posted one of his meticulous spreadsheets to the WoW economy subreddit. It contains a set of expertly appraised auction house margins for all of Azeroth’s many tradeskills—blacksmithed weapons, stat-buffing cooking recipes, excavated gems. I’m writing this at 8pm on a Sunday, and right now there are currently 28 fellow anonymous prospectors in the Google Cloud, scrolling through The Lazy Goldmaker’s sage advice.

“I just want you to know that you’re the best,” says Feezus, a Reddit user who has the top comment on the thread with 49 upvotes. A few pages down another user, Imfromeuw, chimes in: “MVP.”

Gold in them hills

Consider The Lazy Goldmaker somewhat like World of Warcraft’s personal Jim Cramer—the man you turn to for fiscal advice when you’re trying to drum up funds for a new mount, or a rare pet, or perhaps most prudently, the WoW Tokens that let you buy subscription time off of other players with in-game currency.

The Goldmaker himself chooses to remain anonymous, but he does disclose that he is 30 years old and Norwegian. It was during the Burning Crusade, more than a decade ago, that he first became interested in the economic side of Blizzard’s immortal MMO, and he’s been operating The Lazy Goldmaker blog—where he posts columns, analysis, and other musings—since 2016, shortly after the launch of the Legion expansion.

“It’s a bit of pressure,” he laughs, when he reflects on his newfound influence. “When I say something now, people are going to take it pretty seriously.”

Today, The Goldmaker works the auction house well enough to pay for two accounts all through those WoW Tokens, which requires roughly 300,000 gold a month. That’s no small sum. He does this despite holding down a full-time job, and occasionally he only spends about four or five hours a week in the game.

The way he describes it, some people play World of Warcraft for the white-knuckle high-end raid encounters, some for the PvP, and some to live out their shrewd venture-capitalist fantasies in a digital economy.

World of Warcraft lets The Goldmaker experiment—he’ll spend hours tinkering with the untapped capital of, say, the profit yields of the new Inscription recipes—and he’ll report back on his blog detailing each of his successes and failures, much to the glee of his international bulwark of disciples. After all, it’s not like he’s risking anything truly disastrous or life-changing. As the Goldmaker reiterates to me, we’re talking about the currency of elves, dwarves, and orcs in a computer game. He can afford to be a little cavalier with his investments, because “it’s just pixels at the end of the day.” 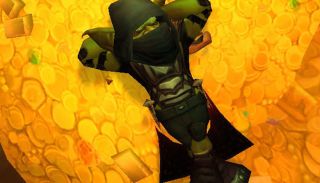 The Lazy Goldmaker’s founding philosophy, as you can probably tell from his namesake, is that making money in World of Warcraft doesn’t have to be difficult. Yes, some of the economic add-ons can be a little ornery at first glance—one look at TradeSkillMaster might make your eyes roll into the back of your head—but it’s a learning curve that can be mastered if you have someone lighting the path. The slogan embossed under The Goldmaker’s blog reads “minimum effort, maximum reward,” and the man himself states that anyone who believes that getting rich in World of Warcraft requires a huge commitment of either time or academic acumen is misguided. No, it’s about building a system and sticking to it, and it rewards anyone who’s willing to try. With a few tricks of the trade, you’ll be set for life.

You can read the fundamentals of how The Goldmaker breaks down his economic principles in a beginner’s guide he posted to his website this March. “World of Warcraft is a game about constantly improving your character,” he writes, and as a financial opportunist, it’s your job to provide avenues to either help those characters boost their power levels or beautify their models. So, as an upstart auction house shark, you’ll learn to farm efficient materials in Azeroth, target specific high-value recipes that you can turn around quickly, and buy out supplies when they’re abundant and repost them when they’re scarce.

One of the more devious strategies I learned from The Goldmaker is to always post my alchemy potions on raid reset night—when all of the bosses in World of Warcraft are resurrected for fresh guild attempts. Of course those stat-buffing brews will sell like hotcakes, and of course you can juice the prices a little.

“I have a background in statistics and economics, so the math side of the auction house comes easy to me, which is an advantage,” explains The Goldmaker. “And it’s not like World of Warcraft goldmaking is rocket science. You buy some cheap materials and you turn them to finished items that players want, and you sell them for more than what the materials cost.”

As a digital capitalist, it only makes sense that The Goldmaker would take some steps to monetize his position outside of Azeroth too. He’s set up a Patreon, which has garnered 241 eager backers, and offers a premium Discord channel, early access to his market analysis, and 20-minute one-on-one coaching sessions to escalating subscription tiers.

The tenor of the blog has also gotten more flavorful as The Goldmaker’s brand continues to percolate. Alongside his more studious numbers-crunching, he also writes a regular Wall Street Journal-esque financial column he calls “Goblin Mindset,” as well as a stunt campaign to hit the Blizzard-mandated cap on player wealth, (10 million gold,) while starting with a level one character and a net worth of zero.

Someone was eventually going to become the Horde and Alliance’s Dave Ramsey, so it might as well be him.

“I’ve always thought of myself as someone who could be good at writing, but obviously you never get better at writing unless you’re actually doing it,” says The Goldmaker, when I ask him what motivated him to carve out this specific niche in the World of Warcraft media. “About half of my content is very specific guides. And the other half, with the Goblin Mindset series, I’m exploring more general concepts—why stuff works, why stuff doesn’t work. It gives me two different writing avenues, where I have to have a different voice for each.”

Elune bless The Lazy Goldmaker, then, because in a time where global concerns over the concentration of wealth are reaching a fever pitch, it’s nice to know that at least one baron is interested in getting the rest of us rich. No matter what’s going on in our personal lives, our avatars may inherit a hard-won bounty, one Veiled Crystal at a time.