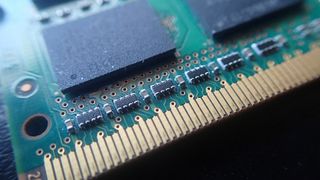 Now that graphics card pricing is back to where it was before the whole cryptocurrency gold rush ravaged the market, we just need memory pricing to come down so that building a PC from the ground up can be as affordable as it was a year or so ago. Will it actually happen, though? A new report by DRAMeXchange, a division of TrendForce, suggests it will.

What’s interesting about the report is that it pinpoints the reason for the upcoming decline to a CPU shortage, and specifically Intel processors. According to DRAMeXchange, Intel initially planned to mass produce Whisky Lake CPUs in the third quarter, as it anticipated a busy sales season for laptops. However, that didn’t happen.

“The precise reason behind the shortage of Intel CPUs is currently unclear because the problem simultaneously affects the newly arrived CPU product lines and product lines that have been in the market for some time. The affected products include the improved version of 14nm++ and product lines based on the 14nm+ Coffee Lake platform, which has been in mass production for half a year and is one of the solutions for mainstream models in the notebook market,” DRAMeXchange says.

Paul Alcorn at TomsHardware wrote about this last week, as it pertains to Intel’s 14nm chips. We looked into at the time and didn’t see all of the same price hikes on existing CPUs (which could indicate a shortage), but we did notice the Core i5-8500 selling for higher than usual. At present, it’s listed on Amazon for $209.99, up from its average price of $196.75. On Newegg, it’s only available through a third-party seller, for $310.67.

This will have an impact on memory pricing, DRAMeXchange says. The market research firm previously predicted that memory pricing would drop by around 2 percent sequentially in the fourth quarter, but notes “it is now possible that the price decline will become even larger due to the shortage of Intel CPUs and lower demand for notebooks and PC DRAM in a row.”

We’ll highlight noteworthy memory deals as we see them. In the meantime, if you’re in need of a memory upgrade and can hold off for a bit, it might be worth waiting a few weeks to see what transpires.