The Oculus Quest isn’t as powerful as the Rift, but it’s probably the future

High-end PC headsets are not how VR gets big. That much is clear by now, more than two years after the launch of the Oculus Rift and the HTC Vive. Neither headset has brought VR to the masses. The PC is expensive, the gear’s expensive, and that damn cable makes it hard to fully feel the freedom we want in virtual reality. The Quest, which Oculus announced at its VR conference on Wednesday, has none of those problems. It’s a $400 headset, including a pair of Touch controllers, that offers head tracking closer to the Oculus Rift than cheap mobile headsets. The Rift isn’t going away, but after spending some time with the Quest, I think it’ll become the centerpiece of Oculus’s quest to put VR headsets on as many heads as possible.

Up to this point, most people who have experienced VR have done so with a headset like the Samsung GearVR or the newer Oculus Go, which are cheap and portable. Both run on Android, and so does the new Oculus Quest. But the difference is seriously night and day. The Quest makes those headsets look like toys. Neither can do true positional tracking, or run games that are anywhere near as demanding as the Oculus Rift on a decent PC, but playing games on the Quest does feel like using a high-end headset.

At Oculus Connect I got to play Dead and Buried on the Quest, in a large space set up like a basic laser tag arena. If you’ve played any games on the Vive, you probably know how much more immersive it feels to walk around instead of sit; standing and moving within a world sells presence better than anything else. But unless you’re using some kind of fancy (and heavy) backpack rig in a large space, you can’t walk very far.

The wireless Quest is so freeing by comparison. It doesn’t need base stations to track; the tracking is inside-out, using sensors built into the headset. For the demo, the developers had used the headset to scan the environment, and in-game skinned and textured the arena’s simple boxes into wooden crates that fit the Wild West theme. It was really fun—and felt surprisingly natural—to walk around in VR, dodging from cover to cover, and the game looked just as good as I remembered it from a few years ago on the Rift and ran without performance issues.

Most people won’t have this kind of space in their home, but the promising thing about Quest’s approach is it can be used almost anywhere: you can scan your room and it’ll warn you when you’re close to bumping into a wall or a table. There are some drawbacks to the inside-out tracking. For example, if you move the Touch controllers behind your back, the headset will lose track of them. That wouldn’t happen with the Vive’s tracking system, or an Oculus Rift with multiple sensors set up. I also ran into a couple issues where the tracking momentarily stuttered, seemingly because my face was too close to a surface. But this is pre-release hardware, and for the most part the tracking performance felt on par with the Rift.

Like other mobile VR the Quest runs on Android, but it’s using a pretty powerful Qualcomm Snapdragon 835 processor. This isn’t the most powerful chip in the mobile world, and it’s still significantly weaker than a dedicated graphics card. But mobile SoCs are improving by leaps and bounds every year, which is a big part of why I think the Quest, and not the Rift, is the future focus of Oculus’s VR efforts. Six degrees of freedom tracking puts this in a league beyond other mobile VR, and totally untethered movement makes up for a hell of a lot compared to a PC headset.

Games will look much better on the Rift, and the Snapdragon’s power will limit what this headset can run, period. But for the next few years, that gap’s going to keep getting narrower. At some point, I think developing for the Oculus Quest will be like developing for a minimum spec: you’ll be able to get a higher fidelity experience on the PC, but it’ll still run and play fine on Quest’s Android hardware. 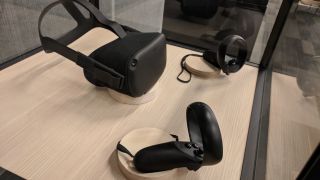 Case in point: I also played SuperHot on the Quest, and it ran just fine, indistinguishable from the game running on a PC, at least for me as a mere Superhot dabbler. I’d say it was actually better on the Quest: I was able to freely walk around and dodge incoming bullets, and catch guns out of the air using the Touch controllers just as effectively as I could on a PC. Being able to take a game like Superhot to a friend’s place, or setting it up in the backyard at a barbecue with everything stored on the headset itself, no need for even a laptop? That’s the future VR needs, even if it means giving up some PC muscle.

The Quest actually has a newer, higher-end display (OLED this time) than the Rift, at 1600×1440 pixels per eye. One drawback is that it only runs at 72Hz, rather than the 90Hz of the Rift. Higher refresh rates really help prevent motion sickness in VR, and I hope to see the Rift up that refresh to 120Hz in a second generation. But with the rate mobile hardware advances, the Quest may well catch up with it before too long.

Even if Oculus finds a way to make the second-gen Rift wireless, with low enough latency communicate seamlessly with a PC, the all-in-one Quest feels like the natural future. Rift will be the showpiece for the flashiest games, like owning an RTX 2080 Ti. For everyone else, the Quest will play games well enough.

And that’s how VR can finally grow a healthy userbase in the middle, smack dab between the crazy high-end hardware and people watching 360 videos on cardboard boxes strapped to their faces.