Where to watch the $10 million Fortnite Fall Skirmish 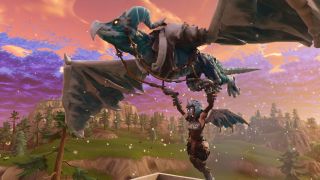 Just before the launch of Fortnite Season 6, six weeks of competition have begun with the Fortnite Fall Skirmish, awarding $10 million over a changing series of competitive and entertainment play formats. Alongside Hold the Throne duos and solo matches with high rewards for eliminations, expect to see ATK races, a couple quick games of golf, and other mini-games to break up the tension. Clubs and corresponding club prizes are also new to competitive Fortnite, but we’ll explain all that later. More importantly, let’s break down the Fortnite Fall Skrimish schedule and point you to where you can watch it.

Where to watch the Fortnite Fall Skirmish

Watch the Fortnite Fall Skirmish above, or head to the Fortnite Twitch channel in case you really need to see what Twitch chat has to say (you don’t).

Week one schedule: Group one of Hold the Throne duos has already started and group two begins at 1 pm PT (4 pm EST). It’s not clear when the week one trial will air.

Hold the Throne duos plays exactly like a normal duos match, but rewards players points for both victories and eliminations. Because eliminations are so heavily incentivized, expect more aggressive play from most teams. If a team’s kit or position isn’t looking hot, you’ll often see them forsake the VR in favor of elims. A VR is most often just a nice bonus for overall excellent performance.

Players of the same club will join and play squad matches from the default squad playlist, meaning they won’t be in a lobby of pros, but a lobby of public players. Points will be rewarded based on which squad secures the highest amount of eliminations in a single match as well as their overall placement in each match.