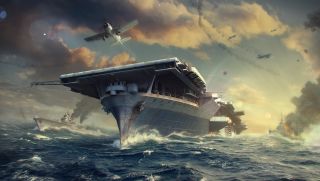 Well, let’s be pretty up front – if you’re the kind of player who’s always wanted World of Warships’ aircraft carriers to be a little more action packed, the massive update hitting CVs in the next few months is going to be right up your alley. The new gameplay is designed to present truly cinematic carrier battles, and to bring the carrier game into line with the ‘all-action’ ethos of the rest of the game.

If, however, you’re like me, and you really enjoyed the more strategic aspect of carrier battles in the game as it currently stands… Well, you’re just a little screwed. That RTS-style, top-down view of the game, and the ability to control multiple squadrons of multiple types of aircraft, will be going the way of the Dodo.

That’s going to be a very hard sell to some players – and Wargaming knows this.

“Well it’s going to be hard, because if you like the RTS style of the gameplay… that is gone,” says Artur Plociennik, Executive Producer on Wargaming’s naval not-quite-sim, World of Warships. “The top down, slower game, multiple squadrons… that’s not the thing we’re doing, so selling players the new mechanics is going to be tough.”

“Because if you’re a good player now,” he adds, “it’s going to change a lot – you’re going to have limited salvos, less planes in the air, and you’re not going to be seeing the big picture like you’re used to. You’re going to go from being able to win the game by yourself to being just one part of each game.”

Which is part of the reason these sweeping changes are being worked on, ahead of rolling out by – hopefully – the end of the year. Wargaming’s always built itself on being very open to feedback, and tracking in-game statistics with a serious eye for detail, and that’s driving the carrier game’s new direction. I’m bit of a carrier fan (can you guess?), so I was surprised to hear that only perhaps three percent of players play CVs; that low number of players, combined with a widely different level of player skill within the class, has made the big ships and their lethal aircraft very difficult to balance. On the one hand, a good CV player can swing the tide of a battle by themselves, and walk away with top spot in that match’s rankings, while a bad one can do the opposite. Which, when you take into account the kind of abuse a poor round with a CV can get from your fleet-mates, I guess makes sense.

So what’s replacing it?

A whole new way to fly

Previous carrier battles began with launching every bird you had, and then controlling them RTS-style around the map – it felt very much like the scenes you see in movies, with aircraft controllers pushing blocks of wood around a large map, listening to radio reports and vectoring pilots to the spot where they’re most needed. In the new mode of play, when you launch a squadron, that’s the one you control, and you control it in a third-person, over the wing view using the traditional WASD keys. You can speed up, or call in fighter cover for a limited time, but otherwise, it’s all about controlling that one squadron onto your target.

It’s a much more intimate way to play with carriers – in fact, you’re really more of a squadron commander than a carrier captain in this mode. Each aircraft is individually modelled in terms of damage, and when you move into to actually attack an enemy ship, up to three planes peel off for the actual attack run. So, if you’re running a squadron of torpedo bombers, they dive low to the deck, and you can control their approach and the release of their payloads. Timing is everything. Like in the current game, it’s all about striking where the enemy will be, leading the target and trying to anticipate where they’ll turn or how fast they’ll be. Since release is manual, you’ll also need to keep note of the distance your torps need to travel before they activate, too – release too late and you’ll be more accurate, but your fish won’t be able to detonate on target.

As planes release their payloads, they leave the squadron, heading back to the carrier. With high-tier CVs, and large, 12-plane squadrons, this can be quite thrilling – it’s entirely possible to line up a long, winding attack run, planes swooping out of the sky, attacking one ship, while the squadron then moves on to another target. With only three aircraft in each attack wing, you might not be able to get those massive first strike kills, but you can spread that damage out a lot more.

And if you can peel off on an attack run, flack and machine gun fire bursting around you, without saying to yourself “Stay on target… stay… on… target” in the voice of Red Leader, you’re a better person than I.

Those not so friendly skies

There’s also a new aircraft type, an attack fighter loaded with racks of rockets. They don’t do a lot of damage, but they’ve a load of splash damage and cover a decent area; they’re much more likely to hit, making them ideal for finishing off damaged ships. And bombers are still the go to for causing critical damage and fires.

It’s a profound new direction for the game, and not just in the way CVs play. With only two carriers in each battle – that’s not changed – there’s only ever going to be four squadrons in play at any one time, and fighters, while still powerful, are one-shot defensive measures much like fighters or recon craft on cruisers and battleships. It makes the sky much less chaotic.

“It’s no longer like the Battle of Midway,” Artur admits, with a dozen or more squadrons dueling and tracking enemy ships and squadrons. Even if you’re not a CV player, the game is going to be different, because now, every squadron you face is going to be piloted onto target, and so a whole different set of skills is going to come into play, on all sides of the equation. It’s just not going to be quite as epic – but, hopefully, nor will it be quite so frustrating.

At the moment, though, it’s still a work in progress, and our hands on time was limited to a player-driven CV on each side, with the rest of the roster filled by bots. The code we played is far from final, but after a couple of sessions spread over two days, I was beginning to get the hang of it.

All that said, and as much as I dislike judging any game on early code, I can’t say that I’m entirely sanguine about the changes – but then, I am part of that apparently very small minority that likes the current carrier game, and is so very hard to balance for. Thankfully, if I’m not  totally sold on the new systems by the time they release, Wargaming’s promised players in-game compensation for those wanting to opt out of their hard-earned carriers, so there’s that.

But regardless of what I think, if I’ve learnt one thing about Wargaming in my time interviewing its devs, playing its games, and learning how the company does business, it’s that the company really does know what it’s doing.