After 200 hours of work, all 46 of Dark Souls 3’s lore epitaphs have been found 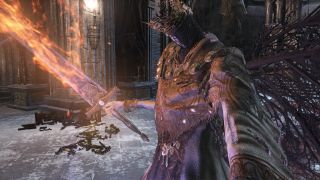 In a video released earlier this month, McDonald suggested that, besides Dark Souls 3’s first four story-supporting epitaphs, the remainder were comprised of placeholder text. Prominent Souls figure Sanadsk then uncovered a database of completed epitaph text from the game’s Japanese retail version, and McDonald then spent over 200 hours fully restoring the alpha blurbs in-game.

I love stuff like this, and I especially enjoy McDonald’s analysis against his previous findings. This is especially interesting here, given how far this particular discovery has come in the past few weeks.

Some of McDonald’s other discoveries have led us to believe Oceiros’ baby wasn’t always invisible, and that Pontiff Sulyvahn may have once been Dark Souls 3’s final boss.