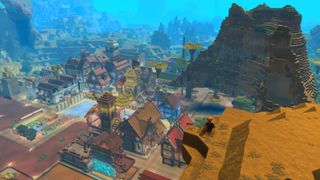 It’s a bit like Minecraft, but more colourful, and more alien. You’ll be gathering resources, building, and fighting enemies, but you’ll also have to contend other players. You can band together with allies to build and defend towns, as well as construct portals that open up other worlds that offer new biomes to explore.

The idea is that you’ll eventually find a role that you like, whether that be a hunter, raider, nomad, master builder—anything you can think of, really.

Developer Wonderstruck—made up of former EA, Lionhead and Hello Games talent—said that the release was “very much a beginning”, and that it has “very cool plans ahead”.