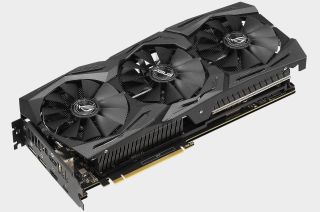 There are seven variants to choose from, including three with dual-fan coolers, three ROG Strix models with triple fan cooling solutions, and a single blower-style card. Here’s are the seven models/SKUs:

Asus isn’t sharing details about clockspeeds on any of the cards, so we don’t know what kind of factory overclock the OC models will bring to the table. Nvidia’s reference specs call for a 1,410MHz base clock and either a 1,620MHz (reference) or 1,710MHz (Founders Edition) boost clock.

All of these cards effectively take up three slots, though officially, they’re listed as occupying 2.5 and 2.7 slots, depending on the model. They also feature different port configurations. Here’s a breakdown:

Asus said these card will be available in the fourth quarter, which may or may not mean next month. No pricing information is available this time, though Nvidia’s MSRP is $499 for reference models, and $599 for Founders Edition models. From what we’ve seen in the early going with the GeForce RTX 2080 Ti and 2080, Nvidia’s hardware partners are aligning their prices more closely with Founder Edition MSRPs.