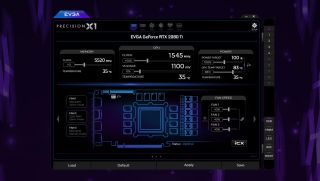 If you bit the bullet and preordered a GeForce RTX 2080 Ti or GeForce RTX 2080 graphics card, EVGA has a new overclocking tool that might interest you. It’s the latest iteration of the company’s Precision software, and as of right now, it exclusively supports RTX cards.

Support for GTX cards is “coming soon,” EVGA says. For now, it only works with RTX cards. If you’re upgrading from an older version, be prepared for things to look different—EVGA implemented a brand new GUI that is supposed to be both faster and easier to use.

Other key features include:

EVGA also posted a video that goes over some of the new and improved features. One of the more interesting parts starts at the 2m28sec market, which goes over the utility’s VF (voltage/frequency) curve tuner. Apparently it takes about 20 minutes to run. What it does is attempt to find the highest stable frequency a card is capable of running. You can also manually input clockspeeds and then test for stability, though if the VF tuner works as advertised, it would take the guesswork out of overclocking.

Be advised that Precision X1 is in beta. If you own an RTX card and want to give it a spin, go here to grab it.