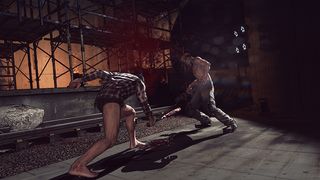 Freebie hack-and-slasher Let It Die, from Killer7 developer Grasshopper Manufacture, will come to PC on September 26, having previously been a PS4 exclusive.

In Let It Die, which initially launched in 2016, you repeatedly climb a tower full of monsters and traps. You start the game in just your underwear, with no weapons or armour, but you’ll grab better gear as you progress. When you die, it’s back to the start, but you’ll be able to upgrade your character between runs.

Its coolest feature is “death data”: basically, every time you die a version of your character and its loadout will warp into another player’s game as a powerful enemy, so some of the foes you’re fighting will have been kitted out by other humans.

Similarly, you can send out “Hunters” to grab loot from another player’s game. They’ll raid it for a set amount of time, but if they die before they’re finished, they’ll come back empty-handed.

Most of the combat is slow, deliberate melee battles, but you’ll also come across projectile weapons such as crossbows, and the occasional flamethrower. It’s proper gory, too:

I’m not expecting big things from it—PS4 reviews say that the combat is a bit shoddy—but hey, it’s free to try out, I like the sound of the multiplayer mechanics, and its microtransactions aren’t too invasive.

The Steam page is live here.