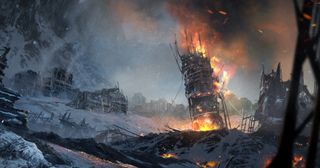 Frostpunk, the chilly survival management game, is all about scarcity. Thankfully, the game’s updates have been comparatively bountiful. There was the survivor mode in June, last month’s People and Automatons update and now an expansion is heading our way.

The Fall of Winterhome is a story-driven scenario due out next week, and like the previous updates, the expansion will be free. You might recognise the name: it’s the city you had to hunt down in the base game. During the scenario, you’ll find out why it all went very wrong.

Details are few and far between at the moment, though we know there will be a new map, updated visuals and a “fresh take on Frostpunk’s morally ambiguous mechanics”. It’s not a leap to assume that we’ll be running the titular city, playing out its final days. It’s a bit negative though, isn’t it? We know how the city ends up, and it’s right there in the title, but perhaps we’ll be able to save it.

We won’t have to wait long to find out. The Fall of Winterhome is due out on September 19. In the meantime, here’s a Churchill quote masquerading as a teaser.