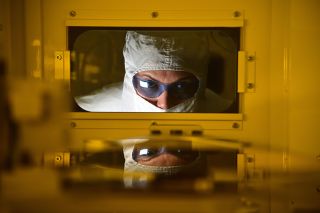 Now that Nvidia’s GeForce RTX cards have launched, the worst kept secret in tech passes on to Intel’s 9th generation Core processors, namely the Intel Core i9-9900K and i7-9700K. The new chips have not been announced, and Intel hasn’t said a peep about them in any of its earnings calls with investors, which is typically when the company will drop little nuggets of info pertaining to future products (like Cannon Lake, for example).

Be that as it may, there is information out there, including official documentation on Intel’s website that referenced several unannounced SKUs. We’ll go over that here, along with everything else we know about Intel’s next gen CPUs.

Let’s start with talking about what Intel’s 9th generation Core lineup is, and is not. Falling into the latter category is Cannon Lake. That will be the real generational leap when it arrives in volume, after Intel works out the kinks and improves yields in its 10-nanometer manufacturing process. The most recent update from Intel has Cannon Lake shipping in volume to customers during next year’s holiday season (so think November or December). This is not that.

What’s the point of yet another optimization? Intel’s decision is possibly rooted in the 10nm delays that have pushed back volume Cannon Lake shipping. We keep saying “in volume” because technically, Intel already shipped a 10nm processor, a mobile Core i3-8121U chip found in a spattering of laptops. How big are the 10nm problems? Bad enough that the mobile chip is a dual-core solution that doesn’t even include Intel’s HD Graphics, meaning it’s a small chip that should have been easy to manufacture, a proof of the fabrication facilities. And that proof apparently didn’t go well. The real 10nm product launch is still more than a year away (which is three years behind the originally planned launch window), and Intel is filling the gap by squeezing out what it can from its 14nm node.

Intel might also be motivated by the popularity of AMD’s Ryzen family, which brought 8-core CPUs to the mainstream market. It’s rumored that at least two of Intel’s 9th generation Core processors will be 8-core chips.

While it’s rumored there will be a couple of 8-core options, Intel hasn’t officially tipped its hand. However, the company did reference several unannounced 9000 series CPUs in a pair of official documents earlier this summer, one that outlined microcode updates and another detailing specification changes. The two documents even revealed some specs. While they’ve since been edited or removed, here’s what Intel inadvertently confirmed:

Now let’s get to the good stuff.

The information from here on out is less reliable, but is also the most interesting because it deals with Intel’s rumored 8-core CPUs. Specifically, the Core i9-9900K and Core i7-9700K. We’re highly confident in most of the specs, other than final clockspeeds, as we’ve had a few off-the-record conversations as well.

Let’s start with the Core i7-9700K. Spanish media outlet El Chapuzas Informatico recently posted a ‘review’ of the chip, with benchmarks obtained from a purported engineering sample. These are early versions of unreleased CPUs that could be missing features or not indicative of the final specs. Assuming the sample is a later revision that accurately reflects the final silicon (and we don’t know that it is), the Core i7-9700K will be an 8-core/8-thread chip with a 3.6GHz base clock, 4.6GHz all-core boost clock, and 4.9GHz single-core boost. It’s also reported to have 12MB of L3 cache.

Right off the bat, the most notable thing about the spec sheet is the lack of Hyper-Threading. Intel has never before released a Core i7 chip without Hyper-Threading. It seems odd to do that now, but the review is consistent with most of the previous leaks.

You can hit the link to browse a whole bunch of benchmarks, including a roundup of several games, though we caution against reading too much into them. When and if this chip actually ships, BIOS updates and platform drivers could alter the early results. That said, things look promising.

In 3DMark, it trades blows with AMD’s Ryzen 7 2700X, with each one taking the lead in different tests. It couldn’t keep up with AMD’s chip in Cinebench R15, though, presumably because it lacks Hyper-Threading.

El Chapuzas Informatico also tried overclocking the Core i7-9700K and saw only modest results, hitting 5GHz at 1.4V. Assuming this is an earlier engineering sample, it may lack the solder that’s purportedly being used on the final retail chips. That would explain the minor overclocking at least. 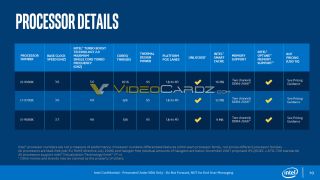 As to the Core i9-9900K, practically every leak to this point indicates it will be an 8-core/16-thread CPU with a 3.6GHz base clock, 4.7GHz all-core boost clock, and 5GHz single-core boost clock. It will reportedly also have 16MB of L3 cache.

There’s no concrete proof that these specs are accurate. However, an anonymous source shared a set of official looking slides purportedly from Intel with Videocardz, and those slides outline the same specs that have been floating around the web.

One of the slides also touches on some of the new features, including the use of a solder thermal interface material (STIM) in between the integrated heatspreader and processor die. Intel has been criticized by enthusiasts and overclockers for abandoning solder and using a lower quality paste. A return to solder should theoretically yield better temps. It’s not clear if that will actually lead to higher overclocks, at least on the 8-core SKUs. Typically the more cores there are, the lower the top clockspeed can be obtained.

Intel didn’t just leak a new batch of 9000 series CPUs, it also revealed information about a new Z390 chipset. Intel ultimately took down the page, though not before AnandTech extracted the pertinent bits for all to see.

Barring any last minute changes, Z390 doesn’t figure to be drastically different from Z370. The main differences boil down to native support through the chipset for six USB 3.1 Gen2 ports (negating the need for a separate chip baked into the motherboard), and integrated 802.11ac Wi-Fi.

You probably won’t need a new motherboard to run a 9th generation Core processor if you already own a Z370 board, just a BIOS update. In fact, MSI recently announced a round of BIOS updates for its Z370 motherboards, and indicated that “the new BIOS updates are fully optimized for Intel 9000 processors.” 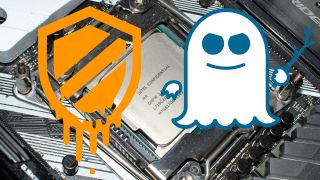 One of the biggest stories from the past year has been the Meltdown and Spectre exploits, which required firmware and OS updates that in some cases caused a significant drop in performance. Put simply, the fixes require some changes that trade increased security and isolation of applications for performance.

The upcoming 9th gen Intel processors are rumored to include some hardware updates that help alleviate the loss in performance. For some applications the loss was already minimal, but random IO on SSDs definitely took a hit. Recovering the lost performance would be good news, since we’re now living in a post-Spectre world.

Outside of performance, the big questions on everyone’s mind are when will the new chips come out, and how much will they cost? As with most everything else, there isn’t any definitive information. So, we have to turn to more rumors.

Videocardz claims the new chips will launch in October, initially with three SKUs: Core i9-9900K, Core i7-9700K, and Core i5-9600K. The Core i5-9400 will launch in the first quarter of next year, and it’s anyone’s guess when the others will come out.

Another news and rumor site, WCCFTech, pegs the launch date as October 1 for both the three aforementioned CPUs and Intel’z Z390 chipset. The site says pricing is expected to be around $450 for the Core i9-9900K, ~$350 for the Core i7-9700K, and ~$250 for the Core i5-9600K. We’re almost certain that date is wrong, given other rumors, and the prices appear to be guesses rather than any specific leak.

To put those prices into perspective, here’s a look at the launch prices for Intel’s 8th generation Coffee Lake processors: 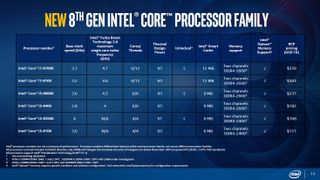 If WCCFTech’s information is accurate, the prices are not out of whack, compared to the processors the 9th generation lineup will replace. Compared to AMD’s second generation Ryzen lineup, however, those all represent premiums. At present, the Ryzen 7 2700X sells for $319.99 on Amazon. It’s not a big gap though (between the Ryzen 7 2700X and Core i7-9700K), so it would come down to platform preference and performance.

Assuming similar per core performance, 9th gen core processors will be clocked slightly higher than the 8th gen parts, and have two additional cores on the top models. The Core i9-9900K should end up being the new king of the hill for consumer CPUs, as it will bring parity with the best Ryzen 7 CPUs in core/thread counts while boasting higher clockspeeds and better IPC. The Core i7-9700K is a bit of a wildcard, with more cores but fewer threads than the i7-8700K. It could end up being the new king of gaming performance, particularly when overclocked, as Hyper-Threading traditionally hasn’t benefited most games.