Half-Life 2 turns 12 this year, and thanks to its powerful, if a bit creaky Source engine it remains as popular with the modding community as ever. Over the years we’ve seen all manner of excellent mods emerge, adding co-op or competitive multiplayer, shiny graphical updates, new story content, and even full conversions that bear little or no resemblance to the original game.

This is the story of a man named Stanley. Or rather, it’s the story of the story: a deviously clever, reactive adventure that second-guesses your every move. As Stanley—or, perhaps more accurately, as the player controlling Stanley—you’re free to follow or ignore the various instructions the wonderful narrator bellows over you, resulting in a tangled, branching story that rewards your curiosity, imagination, and defiance.

The original Source mod was later expanded into a full game.

Adam Foster’s Minerva comes close to the quality of Valve’s own Half-Life 2 Episodes—in fact, Valve was so impressed Foster joined the company. It’s a sizeable story, about the length of an official chapter, with considered level design and a high level of polish. You begin the game strapped to the underside of a helicopter, before being dropped on a mysterious island with a sinister secret.

Gordon Freeman ends the Half-Life series as a crowbar-wielding superhero, a figure of legend in the Half-Life universe. Two-part mod The Citizen provides a new angle on the world, casting you as an ordinary oppressed citizen of City 17. Obviously, said ordinary man soon acquires a gun and starts killing people, but you might snap too if you called that dystopia home.

This lengthy, ambitious mod swings from horror to all-out action. Occasional cutscenes tell the story of a subway technician suffering from leukaemia, but Get a Life’s unlucky hero Alex also has to contend with the mod’s new limb damage system, which causes effects like dizziness and limping, depending on where he’s hit by enemies.

Your mission, should you choose to accept it, is to step into the sneakers of Gordon Freeman and set off to repair a Resistance listening post. This impressive Episode Two mod begins with Gordon rowing to a distant coastline: a coastline that reminds you just how pretty the venerable Source engine can look in the right hands. The right hands in this instance are a couple of established game devs, and their experience shines through pretty much every crevice of this slick, well-paced adventure.

Thanks to its then-revolutionary ragdoll physics, a lot of time in Half-Life 2 was spent throwing chairs at NPCs, or flinging teacups with the gravity gun. In that spirit, Research and Development does away with offensive weapons altogether, leaving just a couple of secondary tools to let you manipulate gravity or order Antlions about. Puzzles are the order of the day here, and it’s surprising just how easily Half-Life 2’s toolset translates to this new focus.

Where there are modding tools, horror mods are sure to follow. You don’t need to have played the original—in fact, it’s included as a prologue, giving you the chance to explore both a haunted house and a spooky hospital. The horror on offer here is mainly of the jump scare variety, so if you were hoping for the psychological horror of Silent Hill, move on to the next item in the list. Nightmare House 2 is basically FEAR—it even features its own creepy ghost girl—but more FEAR is hardly a bad thing.

The impressive Alchemilla drops you in the world of Silent Hill, endless fog, Dark World and all. Not only have the developers nailed the grimy aesthetic of Team Silent’s classic series, they’ve matched its colour palette, borrowed its sound effects, and recreated its lonely atmosphere. It’s such an uncanny representation that it may take you a while to notice there are no enemies traipsing around, but then those games were hardly known for their satisfying combat. 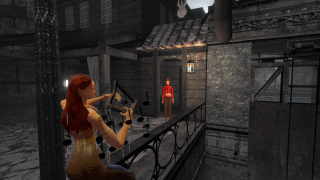 Until now everything we’ve featured has been strictly first-person, but Water bucks that trend. In fact, it bucks a lot of trends, given that it’s a third-person puzzley adventure starring a mermaid. Yes, a mermaid. While you’re (initially at least) limited to a fantasy city’s waterways, this smart mod soon finds ways to get you exploring land too, using a number of innovative systems. The developers of Water went on to make From Earth, another, similarly inventive Source mod.

Well, we couldn’t ignore Black Mesa, could we? For the unaware, this recreates the original Half-Life in its sequel’s shinier engine, and it’s been in development since dinosaurs roamed the Earth. Much more than a simple port, Black Mesa updates Valve’s game with fancier assets, new voice acting, a reworked campaign and more. The team have also excised Half-Life’s much-maligned Xen section, albeit only temporarily until it’s been remade to be, somehow, good. While the older mod is free, you’ll find the newer version on Early Access, accompanied by a price tag.