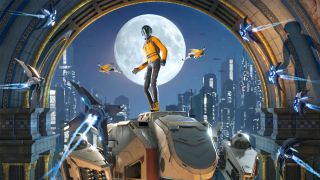 UL Benchmarks is fleshing out its 3DMark benchmarking suite with a couple of new tests, one of which is built specifically for evaluating systems with integrated graphics. The other is a ray tracing benchmark that we covered last month.

The one that is being built for PCs with integrated graphics is called “Night Raid.” It’s a DirectX 12 benchmark, though presumably less intense than Time Spy, which is also a DX12 test.

UL Benchmarks didn’t get into the nitty-gritty details of Night Raid, though did say it is ideal for “laptops, notebooks, tablets, and other mobile computing devices.” It can also be used to evaluate Windows 10 PCs running on ARM hardware.

Night Raid is slated to arrive in October, followed by the ray tracing test sometime in the fourth quarter. It’s not clear if either or both will be included in the free version of 3DMark. We’ve reached out to UL Benchmarks and will update this article when we hear back.

UL Benchmarks tells PC Gamer that the “Night Raid benchmark test will be added as a free update to 3DMark, however some advanced features will only be available in the Advanced Edition.” As for the ray tracing benchmark, UL Benchmarks will be sharing more details closer to launch.