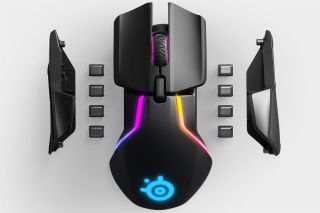 SteelSeries just bred itself a couple of new gaming mice, including one with a detachable tail for wireless operation.

The new Rival 650 Wireless does actually come with a USB cable, but it’s mainly for charging the mouse when it runs out of juice. According to SteelSeries, you can game for 24 hours before needing to recharge the rodent, and it only takes 15 minutes of being tethered to a USB port to give it enough charge for 10+ hours of cordless gaming. If you’re short on time, five minutes of charging supposedly yields over three hours of battery life. We haven’t tested those claims (or this mouse in general), so we’ll just have to take the company’s word for it until we do.

When gaming without the cable attached, SteelSeries promises a lag-free experience from its “quantum wireless” technology.

There are two sensors inside this thing. One is a 12,000 cpi TrueMove3 optical sensor built by PixArt, as found on both the Rival 310 and Sensei 310, and the other is a dedicated depth sensor for lift off detection down to 0.5mm. 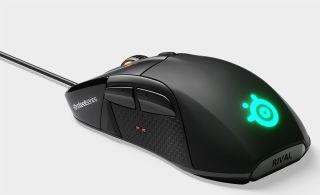 SteelSeries also introduced another wired rodent, the Rival 710. This is basically an upgraded version of the Rival 700, which SteelSeries bills as the world’s first modular gaming mouse with an OLED display and tactile alerts. It’s been upgraded with a TrueMove3 sensor and 60-million click durability.

The Rival 650 Wireless and Rival 710 are available now direct from SteelSeries for $119.99 and $99.99, respectively. In case you missed it, we’ve teamed up with SteelSeries to save 10 percent on all regularly priced items on its site, just input coupon code FUTUREPLC (good through the end of October) at checkout. In this case, the coupon code drops the price of the Rival 650 Wireless to $107.99 and the Rival 710 to $89.99.